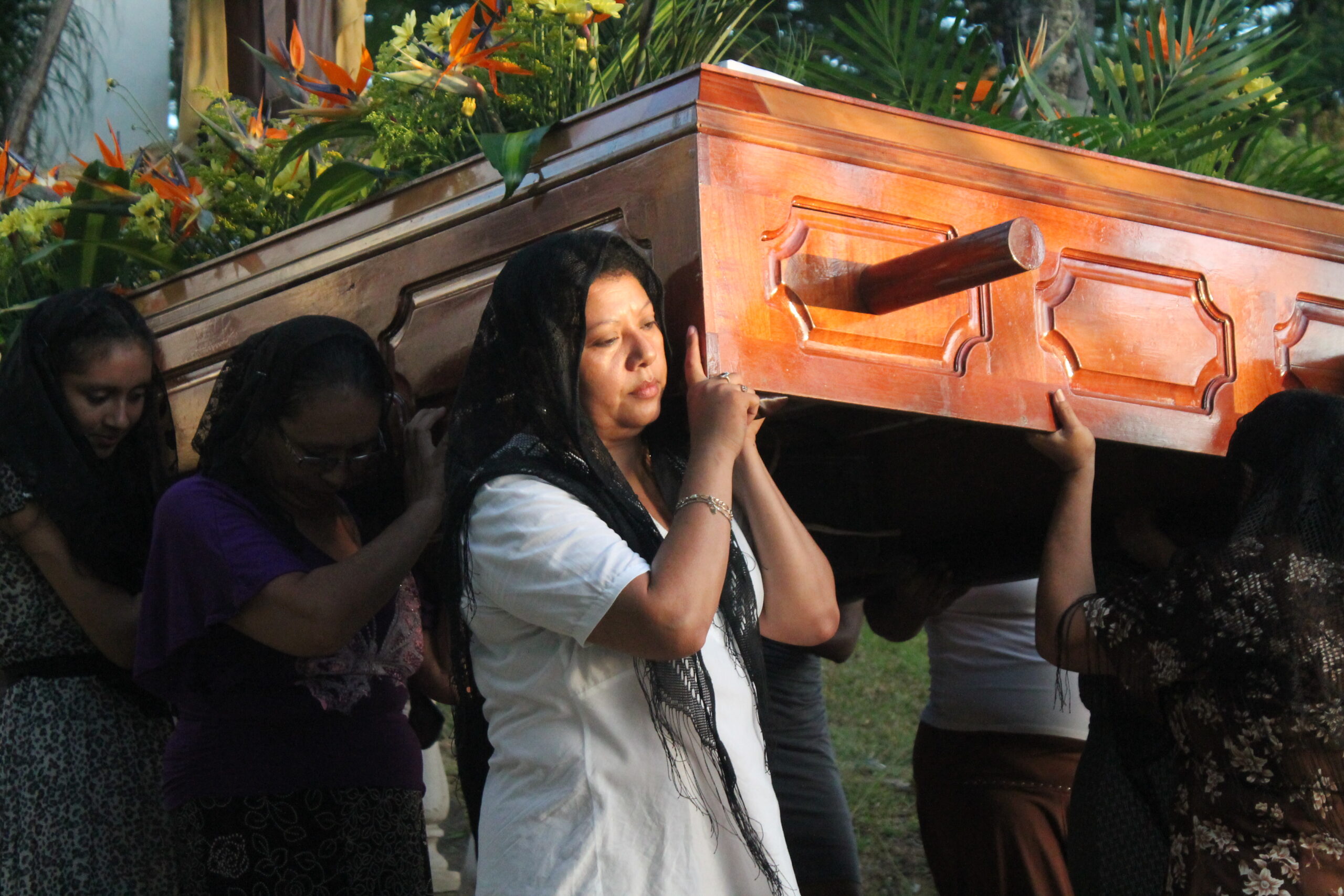 The famous Benque Fiesta is an annual religious and cultural celebration held in Benque Viejo Del Carmen Town. A predominantly Catholic community, Benque Viejo’s patron saint is La Virgen del Carmen (Our Lady of Mount Carmel), and the fiesta is held in her honor. It begins on July 7th with la bajada, the bringing down of the statue that represents La Virgen from the altar. The altar is then adorned and decorated, and the statue returned to its place. This also involves a group of cantadoras (singers) who sing hymns accompanied by marimba music.

The fiesta lasts for ten (10) days with church bells ringing at 3:00 a.m and then at 3:30 a.m., along with fireworks calling faithful participants to the Mount Carmel Church. The alboradas (prayers at dawn), a procession through the streets led by female community members, commences at 4:00 a.m. This is followed by the Novenas which starts on July 8th and lasts for 9 days until the feast day on the 16th of July. Novenas are usually complemented by an elaborate fireworks display. During the novena la Rezadora, the prayer lady, leads prayers dedicated to the patron Saint. Faithful participants follow along and respond to the prayers, and hymns with the marimba are sung.

Finally a breakfast sponsored by “los duenos del dia” or family hosting the morning’s event follows. Traditionally, this would take place at the home of each of the sponsors accordingly. However, in recent years, sponsors provide the breakfast at the Parish Hall. Sponsors also provide the fireworks that are fired on the church grounds, reminding the entire town of this celebration in honor of the patron Saint.

On the 16th of July, after many days of sacrifice and dedication, the feast day is filled with joy and celebration. After the alborada, the rezadora, cantadoras and other participants return to church at midday. They once again through prayer and song show gratitude for blessings received to the patron Saint. At 5:00 p.m. the statue of La Virgen Del Carmen is carried out in a procession through the streets of Benque Viejo; prayers and hymns are sung along the way. The procession ends at the church and a mass is celebrated. On this final day, a lavish display of fireworks light up the sky after the mass. Refreshments are shared at the Parish Hall.

A social feria (fair) complements the religious activities. Originally called La Fiesta de Plata, it took place for the first time from the 12th to the 16th of July in 1967. It was officially opened by the then-Premier George Cadle Price. The fiesta featured the selection of Señorita Flor de la Feria, nightly dances with Benque’s marimba Alma de America, Belize City bands Los Crescendos and Los Beliceños. Over the years, sporting activities, mechanical rides and cultural displays including the folkloric figure La Chatona also draw the attention of neighboring communities, and the wider Belizean populace. Popular bands and DJs are invited to provide the entertainment at dance events, along with vendors of traditional food and beverages.

The Benque Fiesta has changed and developed in many ways over the decades since its establishment. While some components have either been sustained, grown, or have developed in some way, other components such as cultural characters and dances such as el torrito have faded over time.

In the late 1960’s the celebrations were handed over to the Town Board, and in 1967 the first municipal fair committee was established. The Town Board continues to coordinate much of the social and secular components of the Fiesta.

The Señorita Flor de la Feria pageant has gotten grander and grander over the years and continues to be a highlight of the festivities, with more and more young women interested in attaining the honor. A parade with local and international marching bands has also been incorporated into the activities.

Continuity of the Benque Fiesta

Elders in the community are at the forefront of the traditional aspects of the Fiesta, particularly the novena and alboradas. They say as long as they are still alive, so is the tradition in honor of La Virgen Del Carmen. They’ve expressed willingness to take on younger people and teach them the traditions, but there is a need for more young people to take up the opportunity with them. They also point out that it is only those who are truly interested in the tradition and who commit themselves and have the faith required who will take on the torch as rezadoras, cantadoras, and marimberos to continue the tradition.

The sense of community that the Fiesta and its various components inspire is readily visible in the attendance and support for social and festive components, leading many to believe that it will continue to be a strong and viable part of Benque Viejo’s community and living heritage.

Several committees responsible for the various components of the Fiesta ensure that there is always a structured and consistent approach to ensuring the Fiesta continues to be enacted. This is a sign of its development over time.

(What other cultural forms and traditions, skills and knowledge are necessary for carrying out this practice?)

(What places, spaces and locations are integral to its practice?)

Other Sources of Information

Was this article helpful to you?